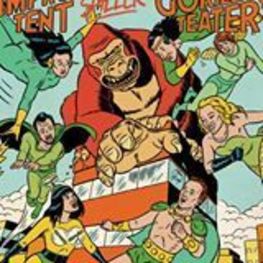 About us: First of all: Contrary to popular belief among non-Norwegian speaking people, ImproTent does NOT perform in a tent. "Tent" in Norwegian means "lit up" or (oddly enough) "excited". Which makes it a clever play on word, see? No? Oh well… ImproTent has won the Norwegian Theatresports Championship three times in a row, in 2005, 2006 and 2007 and the members of the group have all been involved with theatre and improvisation for a long time, all of them being trained actors. When they are on stage, humour tends to get top priority, and the audience consists of people of all ages. The group, which has existed since 2003, consists of 6 professional actors. Their main focus is improvisation, and they’ve played on several venues in (and outside of) Oslo. At present, they do shows at ‘Det Andre Teatret! where they play Gorilla Theatre™, a concept created by Keith Johnstone. Through the years they’ve played anything from Theatresports™ to their own concept ‘Reality-Impro’ in which they poke fun at the many reality-shows that seem to swarm our TV-sets. The group’s members have all had extensive training with Tony Totino , the man who brought modern improvisation to Norway. Additionally, ImproTent has played at various festivals abroad, and the group has good contact with a number of international groups, hailing from anywhere from Russia to Colombia. Most famous of these groups is Loose Moose Theatre , which is the biggest and most renowned Improv-theatre in the world, seated in Canada. ImproTent’s members have attended classes by (among others): Keith Johnstone , the founder of improvisation/theatresports as we know it today. Dennis Cahill , artistic administrator at Loose Moose Theatre. Shawn Kinley, one of the world’s most highly profiled improvisers. What makes ImproTent different from many other improv-groups in Norway, is their wide experience with theatre in general. All members of the group work as freelance actors and do acting for a living, doing anything from street theatre and cabarets to Chekhov and Shakespeare.